Published by Technopark on October 18, 2016 | Leave a response 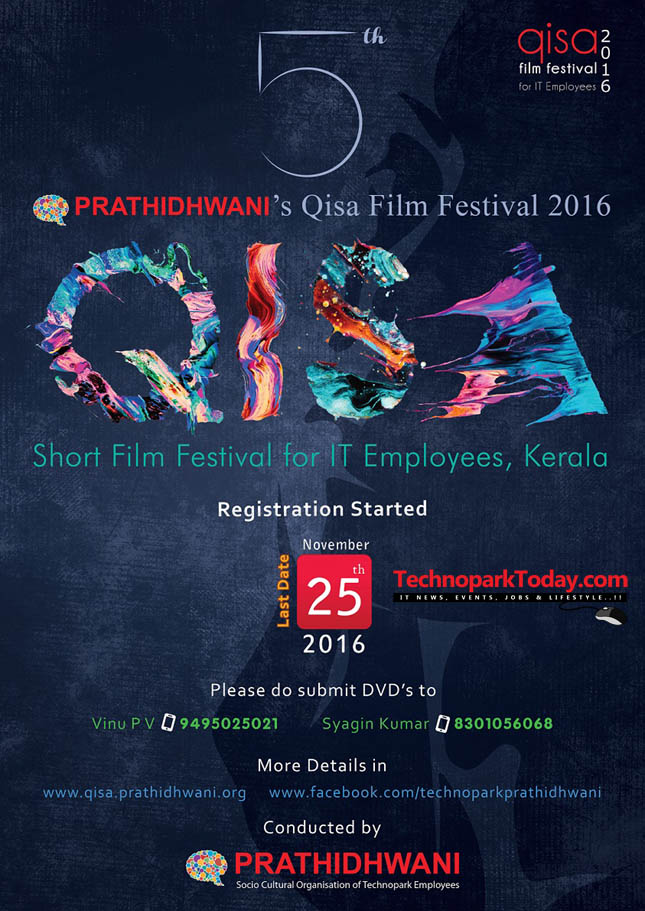 Prathidhwani’s annual short film festival, Qisa Film Festival 2016 (PQFF 2016) will be conducted for the 5th time in Technopark. The film festival, slated for December 3, 2016 at the Travancore hall, Park Centre intends to provide a platform for filmmakers and film enthusiasts to explore short cinema.

It is a great opportunity for all the techie filmmakers to showcase their work as well as a grand occasion for around 1 lakh IT professionals from around 600 IT companies across Kerala, who will get the opportunity to participate, watch and witness first-hand.

The movies will be reviewed by a panel headed by film critic Sri. M.F Thomas, a state award winner for the best book on cinema for “Addorinte Chalathira Yathrakal” in 2006 along with national and state award committee. State award winning film Directors Sri. Sanal Kumar Sasidharan & Smt Sreebala K Menon also will be part of the jury. Screening of films by participants will be held on 3rd December 2016 at Technopark, Trivandrum.

The registration of films for the festival is planned till 25th November 2016.

1. PQFF 2016 is the Short Film Festival for IT Employees, Kerala conducted by Prathidhwani, the Socio-Cultural Organization of Technopark employees. Screening of competition films will be held in December 2016 at Technopark, Trivandrum.
2. The competition is open to all IT Employees of Kerala
3. The Director and Scriptwriter of the film should be an employee working in an IT firm, Kerala and the selection process is subjected to film festival committee’s approval.
4. Only Films produced after 1st January 2014 are eligible. Note : Films already screened in previous Qisa series are not eligible.
5. All films must be submitted on DVD for consideration of the selection committee before 25th November 2016. (Data DVD with 720p resolution is preferred)
6. Each entry must be accompanied by HR letter from working company for identification of the Director and the Script Writer, a duly filled registration form(You can download it from the bottom of this page) and 2 Passport size photographs of the Director and Script Writer.
7. The selection of the Films for the PQFF 2016 will be announced not later than 28th November 2016.
8. The festival committee reserves the right to accept or refuse any film without assigning any reason whatsoever.
9. PQFF 2016 film festival reserves the right to use excerpts and pictures from the film for promotion and public relation purposes.
10. The film can be in any language. But, it should be subtitled in English if the language of the film is other than English or Malayalam.
11. Running time of the film should not be less than 2 minutes and should not exceed 45 minutes.
12. No refund of travel expenses is provided for the participants attending the festival.
13. The films of any Genre can be submitted for the competition.
14. The short film can be documentary, experimental, narrative, fiction, docu-fiction or animation. The original film may be produced in 35 mm, 16mm, HD, DIGI BETA, BETA SP, U-MATIC, DV, DVD; but the film must be available on DVD for presentation or preview purpose.
15. Each participant can send as many entries as he/she likes, but with separate entry forms (you may copy or Xerox entry form), preview DVD, synopsis/description, still photographs, press kit should be enclosed.
16. The following cash prizes with memento will be as • Best Short Film – Rs.11111/- • Second Best Film – Rs. 5555/- • Best Director – Rs. 5555/- • Best Script – Rs. 5555/-
17. Registration fees for each film is Rs.1000/- ( One thousand only). The registration fee can be handed over to Prathidhwani representatives directly or transfer to Prathidhwani account “Account Name: Prathidhwani , Account Number: 32569574709, SBI Technopark Branch, Thiruvananthapuram. IFSC Code: SBIN0007617 ) Please send the transaction details to once you have done the transfer.
18. The registration fee will not be refunded even if the film is not selected for the competition.
19. The DVD along with the Registration Fee can be submitted to Prathidhwani representatives directly or via post – “Prathidhwani, Socio-Cultural Organisation of Technopark Employees, Technopark -695581”. Prathidhwani representatives contact phone numbers: ) o Syagin Kumar (General Convener) – 8301056068 (syagincdit@gmail.com) o Vinu P V(Festival Director) –9495025021(vinupv1978@gmail.com )
20. Participation in the festival implies acceptance of these Regulations. 21. Decisions of the festival authorities regarding all matters not expressly provided for in these regulations or which require interpretation of the clauses mentioned above shall be final and binding to all parties.